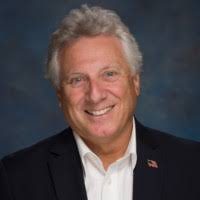 Article by:
Written by Think Currituck 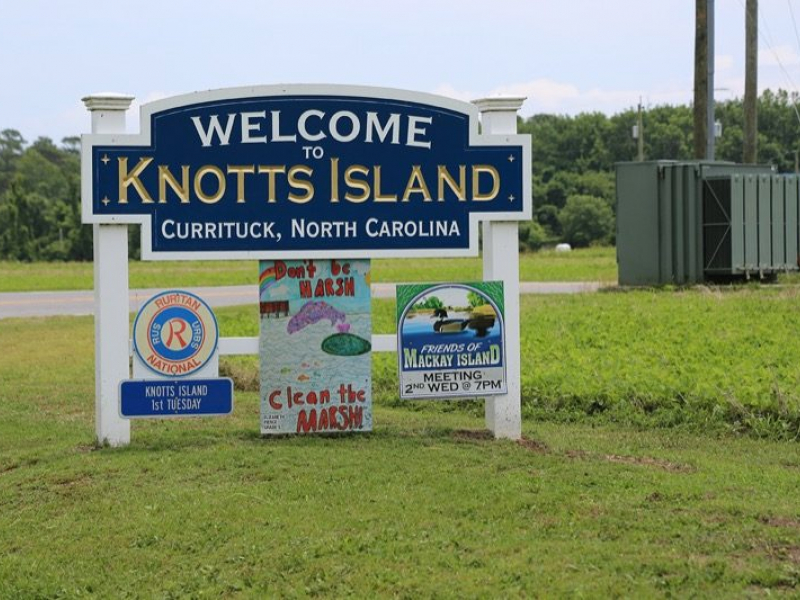 Knotts Island is at least an hour from anywhere.

At least anywhere most people have heard of without pulling out a smartphone, especially if you’re not a native, a longtime resident, or a frequent visitor to Northeastern North Carolina or Southeastern Virginia.

And Knotts Island isn’t really an island. It's part of Currituck County, North Carolina and its landform is more accurately described as a peninsula. It’s surrounded on multiple sides-- but not completely -- by multiple bodies of water. They include Knotts Island Bay and the Currituck Sound.

The community is about 50 miles north of Elizabeth City. And while the island and Virginia Beach share a border --Knotts Island to the south and the Old Dominion’s largest city to the north -- it’s almost an hour’s drive from there to Virginia Beach’s Oceanfront resort area. 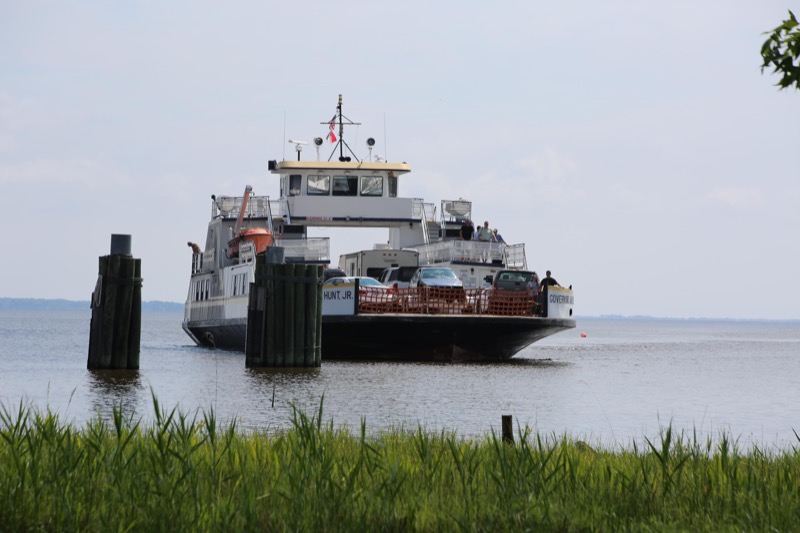 With so much water around though, depending on where you’re coming from, a free state-run ferry between the town of Currituck and the Island is often faster and more convenient than driving. The boat trip takes almost an hour too -- 45 minutes most days.

But however you choose to get there, Knotts Island is worth a visit. It has hundreds of years of history going back to the colonial era, immense areas of immaculate natural marshland and waterfront beauty, and a handful of old and new businesses that have embraced the community’s cultural and geographic landscape. 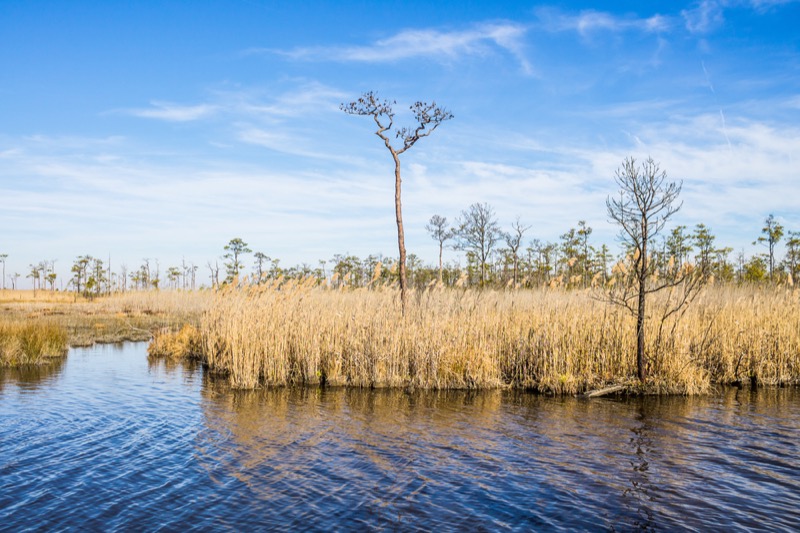 Colonists probably settled in the area in the late 1600s but exactly how and who was involved is lost to history. Colonial-era Virginia aristocrat William Byrd, perhaps best known as the founder of Virginia’s now-capital city, Richmond, is among the first to record a written visit to the island. His account survives today in book form. It’s titled “Histories of the Dividing Line Betwixt Virginia and North Carolina.”

Precisely who or what the community was named after is lost to history. Some have suggested the name might refer to a member of Nathaniel Bacon’s rebellious group of Virginians. Navigating the local waterways was even more challenging then but a necessary part of his assignment to help survey the disputed boundary between the colonies of North Carolina and Virginia.

During the Civil War, Knotts Island developed a reputation as an essential place of production for salt, which was required to preserve meat for both the Union and Confederate armies since modern refrigeration and food preservation methods didn’t exist. U.S. Navy Lt. William Jeffers commanded the USS Underwriter. He was ordered to destroy the local salt works near the Currituck Inlet.

However, reports indicate that he found the local salt-making capacity to be greatly exaggerated. But historians note that because most salt making was typically a small family-operated enterprise, Jeffers may have underestimated the collective weight of the cottage industry. 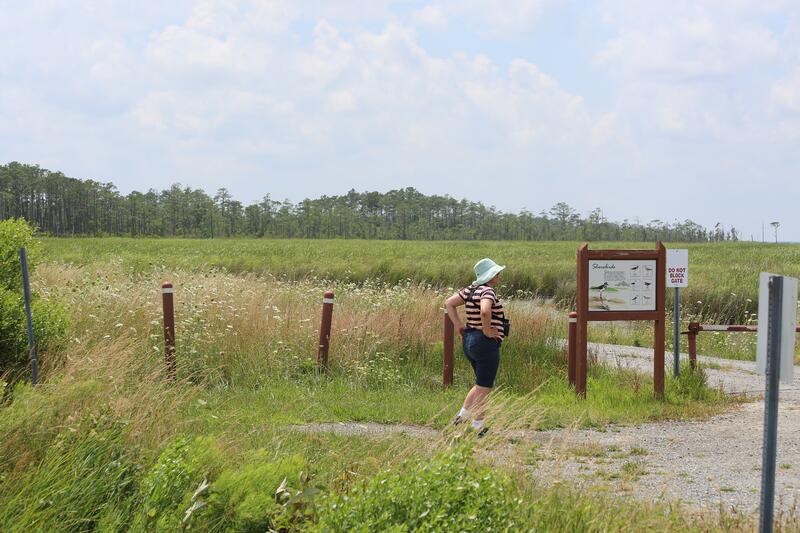 In the 20th century, New York City native Joseph P. Knapp fell in love with the natural landscape and wildlife of Knotts Island. He was a founding member of the organization known today as Ducks Unlimited. Mackay Island National Wildlife Refuge occupies most of the peninsula. The U.S. Fish and Wildlife Service bought the land that’s now part of the refuge from private ownership to create the refuge in the 1960s. Most residents live on the eastern third of Knotts Island.

Also in that era, in 1962, the state-run ferry began to eliminate some of the community’s longstanding isolation by providing a reliable, direct transportation link to the rest of the state. The ferry departs both Knotts Island and Currituck five times a day. If the ferry is part of your transportation plan to get to or from the island, be sure to check the North Carolina Department of Transportation’s social media feeds for schedule changes due to weather or maintenance issues.

Things to do on Knotts Island

Opportunities to appreciate and engage in outdoor recreation are plentiful. The wildlife refuge is home to a thriving population of waterfowl, fish and other animals. Taking a hike on the Charles Kuralt Trail is a great way to see some of the island’s best. Kuralt was a North Carolina native and longtime CBS News TV journalist who often focused his storytelling on natural beauty and wildlife.

If roughing it in the outdoors isn’t quite your taste, instead, take a drive on Marsh Causeway. This road runs east to west about two-thirds of the way across the island, running from the Virginia border to the heart of the community near Knotts Island Channel.

The Flyway Lodge is another more recent part of Knotts Island history. The hunting lodge is a snapshot of 20th-century history and the lifestyle of famous and wealthy guests. It’s played host to famous guests such as Winston Churchill, President Dwight Eisenhower and Nelson Rockefeller. The latter was a close friend of the family who owned the lodge at the time and sent his architects to help rebuild the lodge with the original plans after a major fire in the late 1950s that destroyed the 1920s vintage structure.

Located at the end of an oak-lined drive, mature flowering shrubs surround the house and ornamental and fruit trees dot the property. The rustically-styled waterfront lodge has four bedrooms, four bathrooms, a modern kitchen and a gun room. There is also a three-bedroom wing with a living room that once served as the caretaker’s quarters that’s been converted into a bridal suite. Additionally, the estate includes a U-shaped building that originally housed servants, vehicles, equipment and animals. The second floor has 11 bedrooms, three bathrooms and a kitchen. This building wasn’t damaged in the fire.

Michelle and Paul Dowdey currently own the lodge and property and are updating many amenities. The lodge property includes Faraby Island, which is just offshore of the main peninsula. Faraby Island has permitted waterfowl hunting blinds. Access to other public and private hunting blinds nearby is available. It’s all just less than a mile south of the North Carolina-Virginia line.

Knotts Island’s location is also a boon for visitors or residents who want the best of both worlds -- a small, close community without being hours away from a busier urban landscape. For decades in the past and still today, many residents shop and work in Virginia.

If you’re on the island, Martin Farm and Winery is also a recommended stop. The Martin family moved to Knotts Island from Virginia Beach In 1977. They started a business growing peaches and Scuppernong grapes and later expanded their crops to include apples, tomatoes and pumpkins. A new family acquired the farm in 2017. A variety of fruit wines produced under the farm’s label are available.

If your needs are a bit more ordinary, consider visiting Knotts Island Market. Since retail options are limited, the market tries and succeeds in offering a little bit of everything for everyone. The business predates the Civil War, having opened in 1855. It’s been family or locally owned for its entire 160-plus year history. Inside, you’ll find groceries, fresh meat, produce, beer, and a full-service deli that offers pizza and subs. You can also buy a hunting or fishing license or a lottery ticket, along with ethanol-free gas, according to the store’s website.

In the last couple of years, Knott’s Island gained, to the initial consternation of some residents, its first-ever corporate retail store, a Dollar General. The discount giant demolished an old building and built a new store right next to the venerable local market. A glance at social media indicates that both the old and new businesses are coexisting successfully. 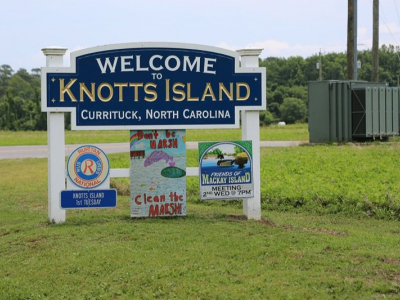